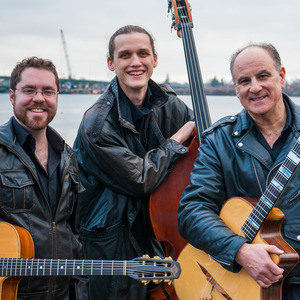 The award winning Ameranouche (pronounced uh-Mare-uh-noosh) plays a passionate style of music they call “Gypsy Flamenco Swing.”  They are veterans of the Newport Jazz Festival, Djangofest Northwest, Muzikfest Bethlehem, PA and the National Press Club.  The name is derived from two words: American and Manouche, the gypsy tribe of guitarist ...

Gypsy Flamenco Swing is about coming together and celebrating our shared humanity.  Ameranouche is committed to connecting deeply with its audience and sharing joy and peace through its live shows and recorded albums.

Richard “Shepp” Sheppard, Guitar, comes from southern New Jersey. He attended the Berklee School of Music, studied guitar and composition with Pat Martino in Philadelphia, studied composition and aesthetics with Dr. Frank Haas in Vineland, NJ and studied guitar with Attilla Zoller in Southern Vermont. He has taught guitar, composition, and music theory as a faculty member of Bennington College (Bennington, Vermont) and Pittsfield Community Music School (Pittsfield, Massachusetts). He has performed and done shows with many different artists. Among these are John Jorgenson, Ritary Ensemble, Rick Danko, Taj Mahal, Hot Tuna, and Vassar Clements, to name just a few. His passion for Gypsy music and love for the guitar in general are what drew him to form Ameranouche. He has written hundreds of compositions and continues to invest his time in the evolution of Ameranouche. Shepp is an endorser of DRH guitars, Wegen picks and John Pearse strings.

Jack Soref Guitar Born and raised in Madison WI, Jack has performed all over the USA as well as internationally on stages in France, and Scotland, and at festivals such as Django in June, The Brooklyn Djangology Festival, The Midwest Gypsy Swing Fest, and Riverside Farm Market and Café Gypsy Jazz Fest. He has performed in concert with such Gypsy Jazz luminaries as Violinist Tim Kliphius, and Guitarists Adrien Moignard, Gonzalo Bergara, Aurélien Bouly and Titi Bamberger. Additionally, Jack has been a guitar instructor at Django in June’s week long Gypsy Jazz music Camp in 2009, 2010, 2012, and soon to be again in 2013. For half of 2011, Jack studied the music of Django Reinhardt at its source by moving to Paris, France. While there he jammed with the old masters like Boulou Ferré and Romanian violin maestro Florin Niculescu as well as the young virtuoso’s currently storming the Paris scene. Now that he’s back in the U.S. he can be found playing all over the Boston area, and is thrilled to be playing with his friends Shepp and Mike as a member of Ameranouche!

A versatile bassist, Michael K. Harrist finds work in various musical traditions.  He has toured extensively throughout Europe and the U.S. with the internationally praised new music ensemble Capillary Action and is a respected member of the Boston improvised music community.  Mike plays regionally with Orkestra Marhaba and jazz great Joe Hunt, among others, and composes and writes songs for the Harrist Family Band and the collective Sol & Kiel. He draws heavily from his background in Jazz improvisation and is deeply committed to studying Hindustani music, late Romantic harmony and classical  Ottomon/Mevlevi music.  Mike studied double bass with James Macdonald at the Open Music Collective in Brattleboro, VT and with Ralph Alessi and John Hébert at the SIM in Brooklyn, NY.  He continues his studies with master musician William Allaudin Mathieu, neyzen Fred Stubbs, and sarangi maestro Pandit Ramesh Mishra.  Mike received his BA in music and religion from Marlboro College under composer Stan Charkey and religion scholar Amer Latif.

That Vibrant Rumble: Ameranouche Taps Merrily Into the Past, From Philly to Paris to Istanbul, on Sun Shine Soul

“We create a vehicle for three people to express themselves in the most joyous fashion they can conjure in that moment. It’s about hooking into that energy that’s beyond human reasoning,” smiles guitarist Richard “Shepp” Sheppard of the Boston-based gypsy flamenco swing trio Ameranouche.

Their joy is infectious, whether they are evoking an exuberant late-night stroll down cobbled streets or the enigmatic smile of a shoal lighthouse. The group starts with the spark and bounce of Django Reinhardt’s hot jazz, but takes it further, not resting on mere recreation of the famous gypsy jazz master and touching everything from Ottoman traditions to American pop genres like Philly soul. They all hail from strong technical musical backgrounds and have intensely adventuresome sides, yet their welcoming, upbeat intensity shimmers on Sun Shine Soul (release: May 1st , 2015), in pieces that reflect the group’s shifting facets.

“One of the great challenges and joys of the group is trying to bring out these other passions, and it gives us a chance to get closer to these other traditions,” explains guitarist Jack Soref. “Certain common interests bring us together, but we don’t impose any genres on ourselves, there’s nothing specific the music has to be. There is infinite possibility and taking that journey together is more what drives us than any given style.”

Ameranouche was nurtured by a Boston-area circle of gypsy jazz aficionados, musicians who would get together regularly to play jazz manouche. “It’s a small scene,” says Soref. “You end up meeting everyone. There’s not really a central single venue or hub, but there are jam sessions with weekly regulars.” Shepp, who founded the group ten years ago, met Soref at a session much like this one. However, it would be years before Shepp, bassist Michael Harrist, and Soref would find themselves playing together as Ameranouche.

Shepp had a long fascination with Django Reinhardt’s music, though his own background is diverse, and he’s played with Vasser Clements and Rick Danko. An avid composer and quicksilver player, Shepp’s tender yet quirky approach to tradition, one that smiles at genre, lies at the heart of the trio’s work. "One of the joys of joining this band has been being able to
become deeply acquainted with Shepp's composing and playing,” muses Soref. “His approach to both his music and the guitar, is highly rhythmic, surprisingly nuanced, and deeply personal.
If you see him live, he is just a force of nature, and can really drive the band. He has synthesized lots of different musical styles into an approach that's all his own."

Shepp and Soref bonded over traditional jazz at first, over a shared love of Reinhardt’s work. Soref’s passion for jazz manouche runs deep, and, as a teenager, he fell for the music one summer at the Festival Django Reinhardt in Samois-sur-Seine, France . “I knew when I heard it, what I wanted to do for the rest of my life,” recalls Soref. He spent six months in Paris, playing both with elder greats like violinist Florin Niculescu and up-and-coming players, who thrummed out gypsy jazz even after hours, when the bars closed up--but let musicians keep playing. (The experience inspired “For My Old Home.”)

Ameranouche has the gleeful flying fingerwork, the high-octane pulse that still manages to feel wonderfully freewheeling. But it is the other colors and elements that set Ameranouche apart from the usual gypsy jazz virtuosos. In the most vivid example on Sun Shine Soul, Harrist brought a 19th-century Ottoman piece to the group, “Hicaz Mandira,” part of the bassist’s profound engagement with modal traditions. A Turkish traditional number may seem like a curious choice for a gypsy swing band, but it feels utterly organic.

The naturalness of the band’s unexpected inspirations and material flows from close listening and mutual appreciation. “If you asked me on the street if I was into traditional jazz and hot club music before this band, I would have replied that it wasn’t really my main thing,” Harrist recounts. “But I see the love that Jack has for it and his scholarly knowledge, and it’s really honed my appreciation. Seeing each other’s devotion allows us to find a space for everyone to explore their musical interests.”

The diversity feels of a piece, thanks to the trio’s tight playing (and singing, on their jubilant cover of The Spinners’ “Could It Be I’m Falling In Love,” a tribute to Shepp’s love of Philly soul). They can lock and drive the speediest gypsy jazz number (the wild ride of Reinhardt’s “Rythme Futur”) and open into gorgeously contemplative pieces (“Miah Maull,” an homage to a lighthouse found on the New Jersey side of the Delaware Bay). As the guitars play off one another, effortlessly exploring the percussive and the melodic sides of the instrument, Harrist grounds the flights of fancy in expressive bass work.

“Most of the Bass solos are bowed,” he explains. “That’s important, because the rest of the time we’re all plucking or picking, so there isn’t much sustain. Using the bow allows me to touch into and explore the modal traditions I love, and add an additional dimension.”

Beyond technical prowess or musical origins, the trio feels guided by the spirit of the sounds that have inspired them. “ We feel that we’re within these traditions because they speak to us from that extramusical place,” Harrist notes. “That’s why we play the music we’re playing. We identify with it. So much of a deep part of us and our outlook on the world in terms of the way things flow. That’s how we can lean on something that seems steeped in the past.”

“Segovia said the guitar is about remembering, and I agree with this strongly,” adds Shepp. “It’s rumbling in you, and you don’t quite know what it is but then again you do. You’re pursuing these sounds and rhythms. They are so palpable and vibrant.”